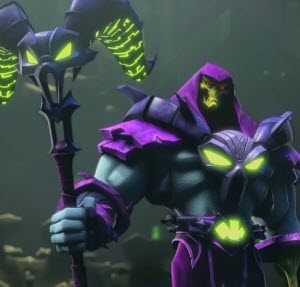 There’s nothing like success to prompt Hollywood into doing more of the same. Therefore, off the back of Noelle Stevenson’s brilliant reboot of She-Ra, we have not one, but two new reboots of He-Man and the Masters of the Universe. Both are available on Netflix, but they are very different.

First up is Masters of the Universe: Revelation. This is created by Kevin Smith, and it is rather more aimed at adults than at children. The story begins with Skeletor finally managing to kill He-Man, whose secret identity is thereby revealed. The forces of good immediately fall to squabbling, with Prince Adam’s parents blaming He-Man’s companions for their son’s death, and Teela absolutely furious that everyone seemed to know who He-Man was except her.

Years later, Teela finds herself teaming up with Evil-Lyn to solve the mystery of what happened in the final battle. That is not the sort of thing that a kid’s show would do.

You can also tell the adult focus because the show spends a lot of time trying to explain aspects of the He-Man universe that are frankly silly, such as why the good guys’ castle is in the shape of a giant skull, and whether Evil-Lyn’s parents actually named her Evil-Lyn.

The best thing about this series is the cast. Mark Hamill has a whale of a time playing Skeletor, and Lena Heady (Cersei Lannister) has equal fun as Evil-Lyn. Sarah Michelle Gellar plays Teela, who is the focal character for most of Season 1.

However, whereas Stevenson’s She-Ra could be equally enjoyed by both adults and children, I suspect that this incarnation of He-Man will mostly go over the heads of any young kids who watch it. For us adults, it is very watchable.

The other series, He-Man and the Masters of the Universe 2021, is created by Rob David, previously best known for writing the Teenage Mutant Ninja Turtles cartoon. This series is very much for kids, with themes of teenagers rebelling against stupid adults being a major part of the plot.

Another major difference between the two series is the style of the animation. Kevin Smith has gone for a look that very much evokes the original series. Rob David, on the other hand, has gone for a manga-inspired look. The characters have giant eyes, and all of the heroes have transformation sequences. He-Man also has a power use sequence that gets into most episodes. There is much posing of the characters in ways that are probably exact copies of the action figures made for the show.

I hadn’t quite realised before looking at these two series just how many versions of He-Man were out there. The Kevin Smith series appears to be based mostly on the original stories, whereas Rob David has mined the He-Man comics for a storyline in which Skeletor is actually Prince Adam’s evil uncle.

I guess that if you are some sort of He-Man purist all these variant storylines will be infuriating. Personally I found the fact that the two series were so different to be refreshing and interesting. If they had both tried to do the same thing one would have inevitably eclipsed the other. As it is, we have two new series that we can enjoy for what each is trying to do, with little in the way of competition.

Of course neither series holds a candle to She-Ra, but I did enjoy watching them and will pick up season 2 of both when they arrive.