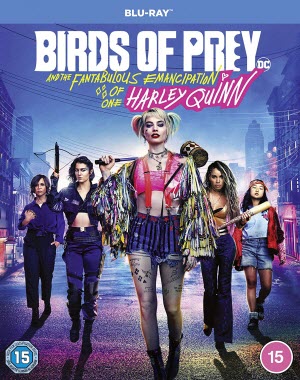 OK, before I start I have to explain something. Leopards and hyenas are natural enemies. Firstly, the lazy bastards keep stealing our prey by ganging up on us in huge numbers. And secondly, unlike leopards who are creatures of impeccable taste, hyenas are exactly the sort of vile creatures who would eat people’s faces. It was probably them who started that horrible meme in the first place.

So when I discovered that Harley Quinn had a pet hyena, I’m afraid I was somewhat poorly disposed towards this movie. OK, hyenas to have a certain amount of feminist badassery, albeit thanks to some highly dubious childbirth techniques, and calling him Bruce is funny. I bet he does do that. But even so; hyena. Strike one.

Having got that out of the way, Birds of Prey is a fairly entertaining movie. It is not in the least bit realistic. It is also about comic book characters so it doesn’t have to be. Plus it is film about a bunch of highly capable women, some of whom do their best to be decent human beings, one of whom is a badly behaved kid, and one of whom is an utterly terrible person by her own admission. And she is a psychiatrist so she should know.

The plot basically consists of a long sequence of men proving what hopeless, misogynistic assholes they are, and our heroines getting excuses to beat the crap out of them in various elegant and entertaining ways. There is something about a diamond that is the key to the riches of a mafia family, but that’s easily forgotten.

It is funny, and frankly I’m not sure what else you can do with Gotham City. Adam West and co figured this out decades ago, and Frank Miller’s attempts to make Bruce Wayne into square-jawed macho action hero have only succeeded in making him more laughable. Comedy is the way to go, and Birds of Prey is pretty good in that department despite the utter awfulness of much that goes on. Margot Robbie is clearly having an absolute whale of a time. There is perhaps a limit to the number of times you can fairly laugh at some thug getting kicked in the nuts, but if that limit exists the film did not manage to find it.

As for the Hugos, I’m still thinking. I’ve watched three of the films thus far and I still think that Soul is probably the best. The three I haven’t seen all look to be various shades of awful. If I’m feeling rebellious when I fill in my ballot I might yet vote for Harley.

But not for Bruce.