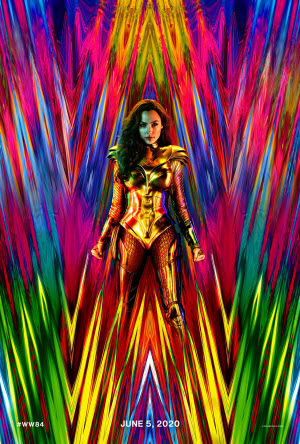 I’ve been avoiding Wonder Woman 1984 for some time because it seemed like no one had a good word for it. But some things have to be done. You never know, the extras might be good. For the first film they were absolutely superb.

Much of the problem, I suspect, is the look of the thing. The garish cover, the awful menu screen. I suspect that it was deliberately designed to look like a 1980s film on VHS, but that just makes it look cheap and ugly.

I can see the idea, and it is a decent one. Cheetah is a great character and a fabulous foil for Diana. The idea of Maxwell Lord being the oil baron who has everything, and can grant your deepest wish as well, is very 1980s. This was the decade of Dallas, after all. It was also the decade in which women were supposed to be able to have it all, and indeed be it all. We were supposed to be Princess Diana one minute, Jane Fonda the next, and Shirley Conran the next; all without getting a crease in our shoulder pads. It could have worked. It didn’t.

I should note, before diving into the faults, that Pedro Pascal is absolutely brilliant as Max Lord. He has a whale of a time, and is actually allowed to act, which he can’t do while stuck under that Mandalorian helmet.

But… but. Kristen Wiig is an interesting choice for Cheetah. She’s absolutely perfect for Barbara Minvera, but during the film she has to grow into being Cheetah, and it all seems a bit formulaic. Also she doesn’t do cat very well. Some of us remember Julie Newmar and Eartha Kitt showing how to be a cat woman. Wiig obviously doesn’t.

Steve Trevor gets brought back as Diana’s wish, which she has to renounce to save the world (spoiler, but I figured you’d want to know that he isn’t back for good). Chris Pine does a pretty good job of playing little boy in a sweetshop when he sees the sort of flying machines that exist this far in his future. But again the emotional side is all paint by numbers.

I think there’s also a problem with how Patty Jenkins understands superhero movies. Obviously the heroes have to save the world, and there has to be some sort of moral message buried in the script. What the film should not be is straight up allegory. Possibly Jenkins is trying too hard to reproduce the moralistic feel of the original William Moulton Marston comics, but that shouldn’t be the objective. Comics history is there to provide inspiration, not to constrain the plot.

Thankfully there is some good stuff. As with the original film, this one opens on Themiscyra. Those first few minutes with the Amazons in their own world are again the best bit of the movie. It all goes downhill from there. On the extras there is an interview with some of the women who play the elite Amazon warriors in those scenes. They are an amazing bunch of women. One is from Bath, and Black, and a mother of three. One was Lucy Lawless’s stunt double for Xena. And one is Finnish, and Black. It is a thoroughly joyous interview.

By far the best thing on the disk, however, is the feature on Lilly Aspell. She’s the Scottish kid who played 8-year-old Diana in the first movie, and is back playing 10-year-old Diana in this one. There are no 10-year-old girl stunt doubles. Lilly does all of her own stunts. Given that the film has her competing against adult women in the Amazon Games, that means that she has to do all the same things that the elite athletes playing those warriors do. The kid is phenomenal.

There is one other really lovely thing about the film. It is a credits scene. I won’t spoil it for you. If you know, you know. If you love Wonder Woman, it is worth buying the movie for.