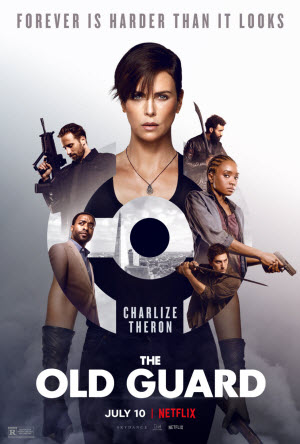 Like many people I was initially very excited by the trailers promising Charlize Theron as an immortal Amazon warrior in the present day. But the initial reactions were underwhelming so I put The Old Guard on my “watch later” list. It wasn’t until the film got to be a Hugo finalist that I got my act together and watched it.

It is, as people said at the time, a bit meh. More of that later, but what I wasn’t aware of until recently is that the film is based on a graphic novel (which is a collection of a comic mini-series), and this is where things get interesting.

It is almost axiomatic in the literary fan community that the film of the book is worse than the book. A film of a short story might be OK, but only because it has to cut out less. Hollywood people just don’t get it. However, the script for the movie of The Old Guard was written by Greg Rucka, who also scripted the original comics. And people, I am about to commit sacrilege.

The film of The Old Guard is much better than the original comics.

There are a number of reasons for that. One is the art. I’m sure that there are people who like that sort of style, but I don’t. Another is the casting. The people in the film look more like the characters that Rucka has written than the images in the comic. The film cast is more diverse too. But mainly it is the plot.

To start with, there is actually more of it. This is an unusual thing to say about a movie, especially one that is quite so full of artfully choreographed scenes of extreme violence, but we actually get more character development and a more coherent plot in the movie than in the comic.

Quite why this is so is unclear. The first volume of the graphic novel, on which the film is based, came out in 2017. Volume #2 came out in 2020, so Rucka was presumably working on volume #2 of the comics at the same time as writing the film script. He may have had a change of heart in the process, or he might have been bouncing ideas off the movie crew. It is impossible to say.

One thing that is very obvious is that the whole Quynh story is absent from volume #1 of the comics. It is in volume #2, but she’s Japanese and called Noriko. The thing with Andy (those of you who have seen the movie will know what I mean) is also absent from the comics. There’s also a whole lot of stuff about Copley in the movie that doesn’t appear until volume #2 of the comics.

So work has been done, and that work has been good. On the basis of that, I’m now feeling a lot more charitable towards the movie than I was initially. I’m not sure that I will be placing it above Soul, though. There is one obvious reason for that.

What is it with Hollywood and history? Go back a few decades, as in Wanda/Vision or Wonder Woman 1984, and they fall over themselves to get the period stuff right. Go back into the 19th Century or beyond and suddenly it is, “who cares, just put people in some silly costumes, no one will know the difference.” The Olde Englande sequence in The Old Guard that gave us Quynh’s backstory was an embarrassment, which is very sad.

Anyway, now you know that volume #2 of the comics exists. It also ends on a trailer for volume #3. So there is more material, and thus future movies are possible. I now want a sequel, just to see how Rucka & co have changed the story for it.