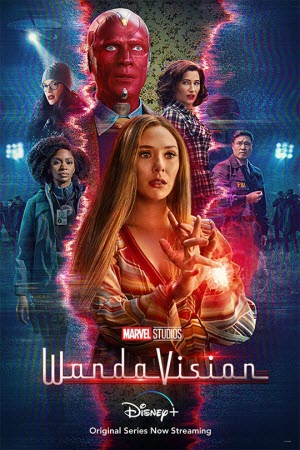 So many thoughts. So many complicated thoughts.

Let’s start at the beginning. When I saw the first trailers and it looked like the show was going to be a Bewitched spoof I was delighted. I’d grown up on Samantha Stephens and her goofy family. It sounded great.

Then it slowly dawned on me which Marvel story the series was being based on. This was going to be a story about a grief-stricken woman suffering a nervous breakdown, and using her powers in abominable ways in the process.

While my childhood TV might have comprised shows like Betwitched and Batman, my childhood reading was full of Marvel comics. The (Original) X-Men were my friends. Jean Grey was my big sister, and we all knew that Wanda was a good kid at heart, even when she was a member of the Brotherhood of Evil Mutants. And on behalf of both Jean and Wanda, I would like to say that we are heartily sick of the trope of powerful women being unable to control their powers or their emotions and being a threat to the universe as a result. Enough is enough.

Unfortunately, the story is kind of necessary to the MCU. Because without it we don’t get Tommy and Billy. And without them Billy can’t fall in love with his Skrull Prince, Teddy, and become part of the cutest gay couple in the universe. You see my problem?

As a result, I headed into WandaVision with some trepidation, and was immediately enthralled by the audacity of the concept and the excellence of its execution. For those who haven’t seen the show (and are presumably sufficiently spoiler averse to read in-depth reviews), each episode plays tribute to the US sit-coms of a different decade.

The first show is set in the 1950s and is based around The Dick Van Dyke Show. It is shot in black and white. The main set mimics the set of the original show. Feige and co. even got Van Dyke himself to come and talk to them about how his show was made. They got a live audience in for the sit-com elements of the show so that the actors could get the feel of how the original worked. The entire crew were in 1950s costume for that. They even made spoof adverts.

The 1960s is, of course, Bewitched. The head of special effects on the show had actually started his career working with the team that had made Bewitched, and all of the special effects were done in the same way as the original. From there we move through the 70s, 80s and so on. The costume department had an absolute ball recreating some of the more outlandish fashions of each period (though I am still lusting after the pink and grey batwing sweater than Wanda wears in the 1980s episode). The theme tune changes for each episode to match the time period.

Wait a minute! Didn’t Marvel pull exactly this stunt for the final season of Agents of SHIELD? Yes, they did. But far fewer people saw that show. It deserves a bit of credit for pioneering the ideas.

The challenge for us viewers was to try to work out what the hell was going on. Wanda and Vision are in this mysterious sit-com world where time seems to leap ahead by a decade with each new episode. Meanwhile, outside the sleepy little New Jersey town of Westview, a team from the government agency known as SWORD is trying to work out what is going on inside, and why the town won’t let them in. Jimmy Woo, fresh in from the West Coast, is there on behalf of the FBI. And an all grown up Darcy Lewis is the resident scientific genius, a role that she learned from Jane Foster in the first two Thor movies.

For those of us familiar with the comics, the basic idea is fairly obvious. We know that this is Wanda’s doing, because she can’t accept that Vision is dead. We can also easily recognise that Agnes the Nosy Neighbour is actually the witch, Agatha Harkness. And can I say that the absolute genius of the MCU casting has been at work once again here. Kathryn Hahn is just perfect in the role (and has a far better wicked witch cackle than I have ever been able to manage). We can roll with it, waiting on the fine detail.

For those not familiar with the comics, the task was probably more difficult, because they will have been trying to work it all out, and they will have expected it to all make sense in the send. I don’t think that it quite managed that.

To start with there was the whole subplot of Monica Rambeau. I’ve been looking forward to her appearance ever since she appeared as a young girl in Captain Marvel. WandaVision promises an important role for her in the story, but what it delivers instead is her origin story. We see her get her powers, and we see that she will be heading off into space to join Nick Fury and the Skrull (and presumably Carol). She’s only a bit-player in the WandaVision story.

In addition the series gets a little too cute in places. A classic example of this is when Pietro turns up. We all know he’s dead, and even Wanda seems surprised to see him. But then Darcy, watching the show from the SWORD base, exclaims, “She recast Pietro!” That makes no sense, unless Darcy, who is a character in the MCU, also knows that the MCU is fiction, and possibly that Evan Peters, who plays Pietro in WandaVision, also played Pietro in the non-MCU X-Men films. It is a joke for the fans, but it also totally breaks the fourth wall.

There is plenty of fan service in the show. One of the funniest episodes is the one set at Hallowe’en when Wanda and Vision dress up in (home made versions of) their original costumes from the comics. They both look utterly ridiculous, but at the same time very familiar. And then the show doubles down in the final episode by giving Wanda an actual costume for the first time, and making it a fabulous MCU version of the original Scarlet Witch get-up. There is so much love for the comics in the show.

I ended up really enjoying it. The decision to mix a heart-rending tragedy with a tribute to TV sit-coms and high-powered superhero battle was a brave one and I think the show mostly pulled it off. Or at least it did for people who are not allergic to superheroes as a concept, and who didn’t expect the show to be complete in itself and make perfect sense. I suspect that it will be taught in film school for decades to come.

And now, we wait, because as usual there were scenes after the credits. We know that Wanda’s boys are somehow still alive. If the MCU follows the comics they’ll be prisoners of Mephisto, who doubtless covets Wanda’s chaos magic. There may be a second series planned, or just possibly this will all be resolved in the second Doctor Strange movie. Either way, I am looking forward to it, because I can’t wait to meet teenage Billy and hear him refer to Wanda as “the Scarlet Mom”.

I also want more of Agatha, because Kathryn Hahn is brilliant in the role.