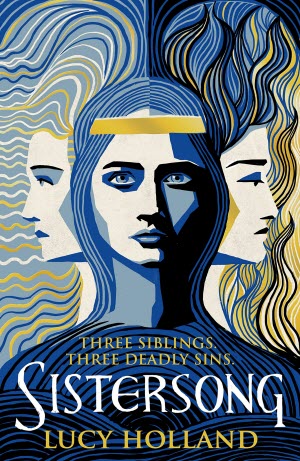 Here’s another book that I had a very small part in creating. Lucy Holland is better known as Lucy Hounsom, one of the co-hosts of the Breaking the Glass Slipper podcast. She has a fantasy trilogy out under her own name, but the silliness of modern publishing is such that she has to adopt a new name for this new venture, even though most people know exactly what is going on.

Whereas the Starborn series is epic fantasy, SisterSong is historical fantasy with strong roots in folk tales. The central conceit of the book is based around “The Twa Sisters”, one of the Scottish folk ballads collected by Francis Child. It is a story of sibling jealousy in which the elder sister causes the death of the younger sister, and the younger sister’s bones are made into a harp so that she can sing her story and obtain justice.

I got interested in the book when I saw Lucy say that she was basing it in the ancient cultures of Devon and Cornwall, what these days we call Celtic peoples. Then I got email from Lucy saying that she wanted to include some gender diversity in the story and, with my knowledge of trans history, could I help?

If you’ve been following my work during LGBT History Month this year you will know that finding evidence of trans people in Celtic society is not easy. I wrote about it here. What you can say is that tribal societies around the world have typically found space for gender variant people, and that such people were often involved in shamanic roles. Lucy knew that, hence her genderfluid version of Merlin. All that I needed to do was help her situate that character within the context of post-Roman Britain.

What people tend to forget about the Roman empire is that it stretched from Wales in the west to Pakistan in the east, and that it traded with civilisations in Africa, Russia and India. People could travel the length and breadth of the empire, and soak up influences from all of the cultures they encountered. It is therefore entirely reasonable for Merlin to have knowledge of people half a world away.

So that was my bit. The other thing, which I am not going to talk about because you need to read the book and get the experience of feeling it for yourself, the other thing was very much Lucy, and I am so very impressed.