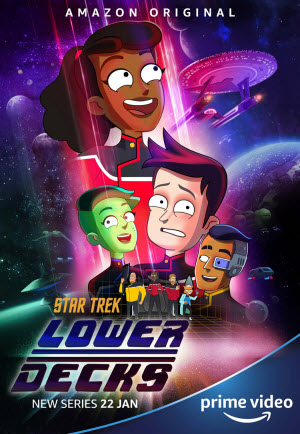 Those of you in the USA will already have had plenty of time to enjoy this animated Star Trek spinoff. For us in the UK it has only just arrived, being available on Amazon Prime. Having heard a lot of hype about the series, I binged on it immediately.

Lower Decks is set after the Next Generation era, because Will Ryker has his own ship. But he and Deanna Troi only turn up in the final episode. The series is mainly about the USS Cerritos, “one of Starfleet’s least important ships”. She is named after a small town in the Los Angeles area, and the captain’s office has a California flag on the wall. Someone was having a bit of regional rebellion there.

The Cerritos is commanded by Captain Carol Freeman, who is very competent but seems to be suffering from the strain of being the first Black woman to captain a starship in a TV series. (Michael Burnham is now captain of the Discovery, but she wasn’t when Lower Decks first aired.)

The ship has the usual complement of quirky bridge characters. The first officer, Jack Ransom, is a bit of a Kirk wannabe, only happy when he’s chatting up girls (badly) or punching aliens. Shaxs, the Bajoran head of Security, is always keen to start a fight, and the ship’s doctor is a grumpy lady feline called T’Ana.

The bridge crew, however, are not the stars of the show. That honour goes to a team of ensigns, the sort of people who have to do the grunt work to make the bridge crew look good. Chief among them is Beckett Mariner. She graduated top of her class from Starfleet Academy and was expected to be a high flyer, but she has a strong anti-authoritarian streak that has made her persona non grata on most ships. The only reason that she is on the Cerritos is that Captain Freeman is her mother. But for obvious reasons that has to be kept top secret.

Presumably all this is supposed to be playing off the characters of Michael Burham and Philippa Georgiou. Though there’s no way that Georgiou would have put up with Mariner’s nonsense.

Mariner’s best friend is Ensign Brad Boimler, a nerdy white boy with an obsessive devotion to Starfleet regulations and a deep and pathetic desire for promotion. Naturally he and Mariner are at odds most of the time. They are joined by two other ensigns: Sam Rutherford, an engineer with a new and sometimes malfunctioning cyborg implant; and D’Vana Tendi, an Orion medic who can’t stop going SQUEEEE! at the mere thought of having made it into Starfleet.

The basic plot of each episode is that the Cerritos gets into trouble in some typically Star Trek way, but is rescued thanks to Mariner’s extreme competence and the enthusiastic bumbling of her friends. Credit for their work tends to go to members of the bridge crew. Sooner or later, however, the simmering conflict between Mariner and her mother must come to a head. And secrets cannot be kept forever.

Most of the point of the series is to poke fun at standard Star Trek tropes. It does this very well. We can all have a wry smile when someone says, “if this was an important mission they would have sent the Enterprise.” The quality of their technobabble is superb. But it has also created a fun bunch of dysfunctional but likeable characters in Mariner and her friends. I really enjoyed the series. And it seems like there will be a second season. I hope us UK viewers don’t have to wait so long for that one.