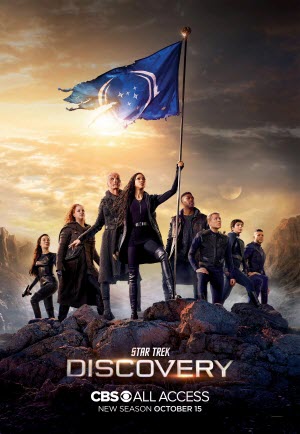 I think that Discovery may have found its feet at last. I have enjoyed the previous two seasons, but the idea of setting it prior to The Original Series was wildly risky and the Young Spock thing didn’t work as well as they had hoped it would. As part of Star Trek, the series didn’t make much sense. Sending Burnham and the crew into the 32nd Century gives them freedom to tell new stories without being too much beholden to What Has Gone Before.

Of course, there were still lose ends to tidy up. It became clear that the scriptwriters did not know how to make good use of Empress Georgiou, so they had to concoct a means of shuffling her offstage without causing too much upset to fans. Much as I love Michelle Yeoh, and Captain Killy, I hope that’s the last we shall see of the Mirror Universe. Georgiou will apparently be a major feature of the forthcoming Section 31 series, and that will be a much better use of the character. But if that series wants to be taken seriously as Star Trek Noir it will need to be less silly and more morally grey than a Mirror Universe story.

A new recurring character for this series is Cleveland Booker, an “independent trader” who befriends Burnham when she arrives in the 32nd Century some months ahead of Discovery. Book, as he’s known, provides the essential service of being a native guide to the new world in which the Discovery crew find themselves. He also provides a new love interest for Burnham, is an environmental activist on the side, and has a beautiful pet cat, Grudge. And if that wasn’t enough, he’s played by David Ajala (swoon). That’s a win all around.

That leaves us with the overarching theme of the current series: The Burn. This was a galaxy-wide event that caused the dilithium cores of starships everywhere to explode with massive loss of life and a significant reduction in interstellar travel. The Federation is a desperate fraction of its former self, trying to hang on to shreds of authority in a galaxy increasingly given over to every-planet-for-itself. The Discovery, with its unique spore drive, is clearly a significant asset.

The main thrusts of the plot have therefore been to re-integrate Discovery into the Federation, and to find out what caused The Burn. The former is complicated by Michael Burnham’s conviction that she always knows better than her superior officers, and by the presence of Book who is very much not a Starfleet officer. Inevitably, because this is a Star Trek tradition, we have an admiral as a potential adversary. I was never quite convinced by Charles Vance as he seemed to have a somewhat different character in each episode, but we got there in the end. I particularly liked his explanation to the main series villain, Osyraa, that you can’t forge a peace unless evil actions have consequences. That was remarkably perceptive of the scriptwriters.

The three-part season finale also provided an explanation for The Burn, and while it depended on more Star Trek hand-wavy physics, it was a remarkably imaginative move. It looks like it also paves the way for retirement for Captain Saru. The finale showed how hard it is for actors to express emotion in all that Kelpien make-up, and I suspect that Doug Jones may have asked for the opportunity to appear as Saru without it for his swansong.

Like in His Dark Materials, the setting for that season finale owed a lot to Piranesi. I’m pleased to see that so many people in the TV business are reading Suzanna Clarke (because I don’t think they discovered an obscure Italian artist by accident).

All of which leaves series 4 clear to go back to simple stories of space exploration and the Federation acting as the kindly galactic police. That’s very traditional Star Trek.

The other thing I need to mention is the queer core of the cast. The gay couple of Stamets and Culber have been joined by the lesbian engineer, Jett Reno, and by Adira Tal, a human Trill host who is non-binary, and their transmasculine lover and predecessor as host, Gray, who is not quite as dead as a former host ought to be. This group forms a charming queer community in engineering and medical. In addition, the actors playing Adira and Gray are themselves non-binary and transmasculine. This is a huge leap forward for trans representation in television. I’m not entirely comfortable with the idea of using Trill to introduce trans characters, because it provides a non-human excuse for them being trans rather than it being a simple fact. However, thus far the series has managed to not make any awful missteps. The way that Stamets and Culber have adopted Adira and Gray is really quite charming.

As I understand it, one of Gene Roddenberry’s objectives for Star Trek was that it would provide a beacon of hope for a better future, one in which all of mankind would work together to explore the galaxy. Season #3 of Discovery looks to have put the show in exactly the position that it needs to be able to fulfil that role for a modern audience.