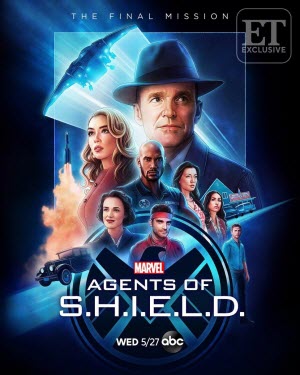 It was announced in advance that this would be the last season of Agents of SHIELD. Maybe the creative team wanted to try new things. Maybe there are so many new Marvel TV series lined up that they needed to re-deploy staff. Or maybe they had run out of ideas for bringing Phil Coulson back from the dead.

Anyway, this season revolves around a plot by the Chromicoms to take over Earth, their own world having been destroyed in Season Six. Knowing that SHIELD is a formidable enemy, they elect to go back in time to prevent the organisation from ever being formed. Fitz and Simmons, with the help of Enoch the Chronicom, devise a counter strategy. But Sibyl, the Chronicom leader, is able to read the timestream, so their plan has to be heavily disguised. This involves Fitz being hidden away from Sibyl’s gaze, and Simmons having parts of her memory excised.

The bulk of the series involves the team chasing the Chronicoms through time. They start in 1931 and gradually move forward, stopping off at key moments in SHIELD and Earth history. That’s a brilliant idea for a farewell season, because it provides opportunities for vast amounts of nostalgia.

The creative team has run with the idea, in that the opening credits for each episode are designed to fit in with a spy thriller from the period in question. And the wardrobe department gets to go to town on silly, 20th Century fashions.

So yes, it is fan service. But unlike, say, The Mandalorian, there is a real TV series underpinning everything. With six seasons behind them, all of the characters have their own story arcs, and these get built on during the season. I’ve already covered Fitz and Simmons. Mac and Yoyo have their relationship to rebuild. May suffers consequences from her sort-of-death at the end of season six, and Yoyo also has to recover from injuries received. Daisy has more family drama, and Deke is trying to find a role for himself far in his past.

Then there is Coulson. It wouldn’t be SHIELD without him. Given the bad guys in the season, they bring him back in a Chronicom body. That means he’s an un-aging android with super strength. He even understands science. Not bad for an old guy. Of course being in silicon can be a problem when you are back in pre-internet days. I loved the episode where Coulson spent the entire time as [REDACTED].

The bit where Simmons gets to cosplay Peggy Carter, and Dan Sousa says her accent is terrible, is also brilliant.

The season gets to revisit a number of key events from previous seasons as the team travels through time. Eventually, however, they must confront the Chronicoms. The final episode seemed a little rushed. Much of the detail of the plan is explained very quickly. It was almost as if someone had decided the plot bit had to be cut short in order to make room for a soppy “what happened next” segment to round everything off. But it was worth it, because after seven years you do care about the characters and want them to have a chance at happiness.

Thank you, Agents of SHIELD. That was a wild ride and times, but you did a great job.