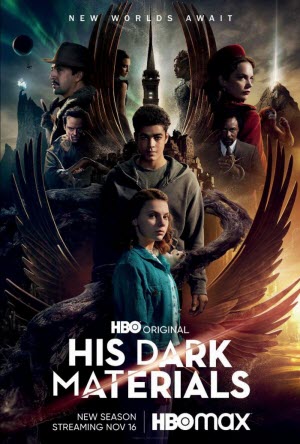 I saved the second season of His Dark Materials to watch over the holiday period and am glad I did. I would have got very itchy having to wait a week for each new episode. I’m pleased to say that it continues to hold my attention.

As with the first season, some of the casting is superb. Ruth Wilson and Lin-Manuel Miranda continue to do great jobs, and Simone Kirby makes a great addition as Mary Malone. I also loved the set dressing for Cittàgazze. There is a definite air of Piranesi influence about those staircases.

Plot-wise, on the other hand, it is very much a middle book of the series. There is a great deal of wandering around aimlessly in the mountains near Cittàgazze in the final couple of episodes and you get the impression that time runs differently for different groups of characters. The only really important development is that Will finds the Knife and learns how to use it.

When I wrote my review of season #1 I wondered how audiences would react when the books descend into theological ranting, which they inevitably must. This season is mostly free of this, but the final couple of episodes set things up for the war between Lord Asriel and The Authority. Lyra is revealed to be the new Eve, and Mrs Coulter vows to avert The Fall. It is all Deeply Ominous.

Possibly the most interesting scene in the entire season is the one in which the angels start talking to Mary through her computers. She asks them why they have been helping humans evolve, and their answer is, “Revenge!” Given that Mary is an ex-nun, that must come as a bit of a shock, but she never revisits the question, and happily accepts a commission from the angels later in the series.

Mary uses the I Ching to communicate with Dust, but watching her walk wide-eyed through the world of Cittàgazze, protected from the spectres by angels, though she doesn’t know that, I can’t help thinking of the Fool card from the Tarot. I should probably look to see if there is a full deck of Major Arcana in the cast list.

There was also a scene from episode 5 that stuck with me. Carlo Boreal has brought Mrs Coulter to Will’s Oxford (i.e. our world) and is explaining to her how this new world works. He notes that the government there is even more corrupt than the Magisterium. I can’t remember if he says that in the books, but it works magnificently well for the UK right now.

Thankfully season #3 has been greenlit, so we should get to see the end of the story. I hope that the TV scriptwriters manage to do as well as Pullman did with the book and make it a powerful piece of fiction. Otherwise we’ll be left with another old man from Oxford lecturing us about religion.