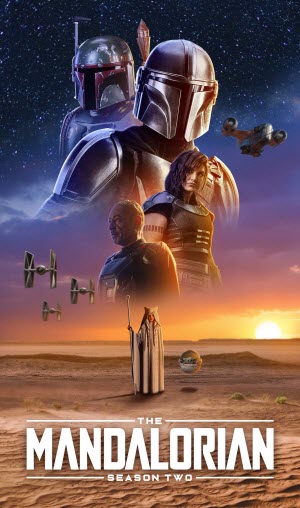 Well, that was a thing. On the one hand it was enjoyable mind candy. It clearly made an awful lot of Star Wars fans very happy. But as science fiction TV? Meh.

This will contain spoilers, but then Twitter was full of them on the day the final episode dropped, long before I got a chance to watch it. Besides, if you couldn’t predict the ending, I have a large conical hat with a D on it that I’d like you to wear.

There are many things to admire in The Mandalorian. They’ve done some great scenery and monsters. The giant sandworm episode was particularly impressive. Also Baby Yoda has been a great hit with viewers. If you are a serious Star Wars fan you will probably have been in ecstasy much of the time given the number of familiar names that turn up. This is all good, as fan candy goes. It is a product; it fills a market niche.

From a TV series, however, I expect better. The plots have been very thin; and bulked out by action sequences. The characterisation is also fairly thin. Even Mando himself is pretty one-dimensional. There’s an argument that the show is basically a Western in space, and Westerns themselves are fairy predictable, but I’m sure that John Ford or Sergio Leone would have done better than this.

There were occasional hints of what might have made a much better series. The show is set mainly on backwater planets. Ruling the galaxy is hard, which is how Imperial holdouts still exist and Moff Gideon can get away with having a star cruiser and a small army of stormtroopers. I would have liked to have seen more of the idea that for many people it doesn’t matter who is in charge. I would also have liked to see more about why people still support the Empire, despite them being clownish villains.

Unfortunately, this is Star Wars. The goodies are Good, even when they behave appallingly (which sometimes they do). The baddies are Bad, and also incompetent. Imperial stormtroopers can’t hit a target with their blasters when it is stood in front of them, and their armour might as well be made of papier-mâché for all the good it does them. Also Imperial computer security is woeful. The occasional bad guy will be good with weapons, but that’s about the most threat they pose.

This season also gave us the Dark Trooper battle droids. They at least gave our heroes a run for their money. Then Luke turns up and goes through an entire platoon of them like a hot knife through butter.

Seriously, if you weren’t expecting Luke from the moment that little Grogu makes contact with The Force and is then immediately kidnapped by Dark Troopers then I worry about you.

Maybe that was the point, though. Perhaps it is supposed to be safe and predictable. Goddess knows, people need that sort of thing these days. But I want better. And Star Wars can do better because it produced Rogue One. It can do it again, if the will is there. Sadly I am reminded of this quote from Ursula K Le Guin’s foreword to her 2001 collection, Tales from Earthsea.

Commodified fantasy takes no risks: it invents nothing, but imitates and trivializes. It proceeds by depriving the old stories of their intellectual and ethical complexity, turning their action to violence, their actors to dolls, and their truth-telling to sentimental platitude. Heroes brandish their swords, lasers, wands, as mechanically as combine harvesters, reaping profits. Profoundly disturbing moral choices are sanitized, made cute, made safe. The passionately conceived ideas of the great story-tellers are copied, stereotyped, reduced to toys, molded in bright-colored plastic, advertised, sold, broken, junked, replaceable, interchangeable.