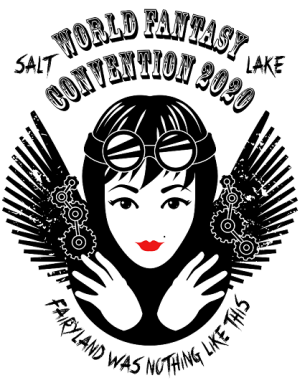 I ended up doing three programme items at this year’s World Fantasy. That’s quite an exceptional thing for a convention that normally has a one-panel-per-person rule, but this year was unusual. The need to go virtual had led to both more panels and fewer potential panellists. I was happy to help out.

The panels I did were a “Queers in Fantasy” one, a “Women in Fantasy” one, and a “Small Presses” one. Those were not their actual titles, but it is what they were. World Fantasy programming has always tended to be unimaginative and generic in this way, and I’m used to checking who the panellists are before going because the quality will be very much down to who is in the show and how good they are at taking the topic and running with it. In all three cases I think we did a decent job.

This year, as you may recall, there was major controversy about the panel descriptions, which were mostly uninspired and in at least one case insulting. Two of the panels I was on had their descriptions re-written before the start of the con. I’m not sure that made much difference to the event, because we had good people on the panels and we’d have managed to be interesting anyway, but hopefully this will shake up the World Fantasy Board a little and get them to pay more attention to the quality of what gets put out.

More importantly, I hope they put some effort into diversifying their operation. The current way in which Board members get appointed is pretty much guaranteed to select for old, white and predominantly male. The need to think about being more relevant to the current state of the industry. SFWA has done very well at that. Locus has been diversifying its reviewing staff. If World Fantasy doesn’t do the same then it risks becoming irrelevant to young writers and editors.

Worldcon needs to change as well, of course, but changing Worldcon is like turning a supertanker; it takes forever. World Fantasy has a Board than can make quick decisions. The big question is whether it wants to.

One of the things that was interesting about this year’s World Fantasy is that going virtual meant big changes to attendance. Lots of people all over the world who could never afford to attend the event unless it was in their home city (and remember that it hardly ever leaves the USA) could suddenly try it out. And a lot of the regulars, being rather old, or being the sort of people who only ever go to hang out with their friends, decided to pass on a virtual convention. Some of these new people seemed to very much enjoy the event, or at least the panels I was in. I hope that the Board took notice of that.

Something else that I noticed since the last WFC I attended is that the content was very much science fiction and fantasy, rather than the HORROR! (and a little dark fantasy) that I’d been used to. I find this a good thing.

While I did enjoy being on programme, I have to admit that for me World Fantasy has mostly been about hanging out with friends. Kevin prefers Worldcon because he gets to hang out with other con runners. I prefer World Fantasy because I get to hang out with authors, editors and critics. The social side of this year’s event did not work well for me. There was no Discord, and with con time being 6 ours behind me I was often in bed before social stuff happened.

The technical side of programming was pretty good. They didn’t use raw Zoom, and they had both a tech person and a comment wrangler on hand to assist with the panels. These things are all expensive in both money and staff numbers, but they make for a much better virtual event.

I watched some of the other programme items, and my main take-away was how old people were. Bear in mind that I’m no spring chicken these days, and yet a lot of the programme seemed to be about people who were much older than me. That can’t be good for the longevity of the event. Of course they were interesting old people, but it gave the convention a very backward-looking feel.

Finally a quick word about the Awards. Possibly because they are juried rather than voted, the World Fantasy Awards were well ahead of other awards in recognising trans writers. Rachel Pollack winning Best Novel with Godmother Night in 1996 is a stand-out moment. This year, however, Best Novel was won by Kacen Callender, a non-binary person of colour. I’m absolutely delighted that I lived to see such a moment. I have Queen of the Conquered on my Kindle and will get around to reading it soon (especially as the sequel is due out any day now).

The other win in the Awards that made me very happy was in Special Award – Non-Professional, which went to Fafnir – Nordic Journal of Science Fiction and Fantasy Research. As I understand it, this is the first time the award has ever gone to an academic journal. The fact that Fafnir is open source doubtless helped a lot. That the award should go to a journal based in Finland, on whose advisory board I happen to serve, and in whose current issue I have an essay, is a matter of particular joy. Huge congratulations are due to the current editorial team: Bodhisattva Chattopadhyay, Laura E. Goodin & Esko Suoranta. Congratulations are also due to my dear friends, Merja Polvinen and Irma Hirsjärvi, who have both played a major part in the founding and success of the journal.

Next year World Fantasy will be in Montréal. As far as I know, I’m still allowed to travel to Canada, so I’m very much hoping that this one will take place in person.