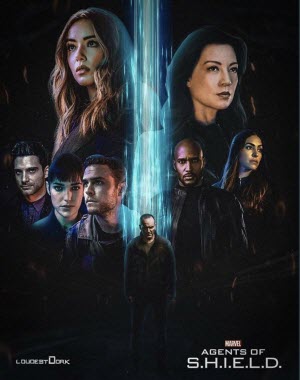 While catching up on The Mandalorian I noticed that season six of Agents of SHIELD was available on Disney, and season seven has now started. It can be a silly show, but after five seasons I had some affection for the characters so I decided to give it a try. I’m glad I did.

This review will include spoilers for season five. If you haven’t seen it yet, look away now.

OK, so when last we saw our heroes they had travelled into the Future to save Earth from some villainous Kree, and from Daisy who was apparently destined to quake the planet to pieces. Which was fine except that found that she’d already done that by the time they got there. Much wibbly-wobby, timely-wimey stuff ensued before everyone got back home to our time.

Well, almost everyone. For reasons that I can’t remember now, Fitz did not go into the future with them, so he had himself cryogenically frozen so he could wake up in the future and join them. Of course that meant that he couldn’t go home either. And then he went and died. At the start of season six, everyone else is back home, and Fitz is somewhere out in space being a frozen popsicle. Simmons and Daisy are off in space looking for him, along with Agents Piper and Davies.

The rest of the team is back on Earth and getting used to the fact that Project Tahiti has caught up with Phil Coulson and he is dead again. Long-time Marvel watchers will remember that Coulson was killed by Loki in the first Avengers movie, and has been sort of semi-dead for the entire run of SHIELD. Mack is now the Director of SHIELD, and this is messing up his relationship with Yo-Yo.

Of course SHIELD without Coulson is unthinkable, so the showrunners have decided to run with the whole idea of bringing him back in more and more outlandish ways. In this season a new threat arrives on Earth, and with it a team of ruthless mercenaries who claim to be hunting it. This team is led by a chap called Sarge, who happens to be genetically identical to Phil Coulson, much to the distress of Melinda May.

Meanwhile, out in space, we discover that a race of androids called Chronicoms have had their planet destroyed and obviously they want to take this out on Earth because that’s how these things work.

Oh, and the team did bring one person back from the future. That would be Deke Shaw who is the grandson of Fitz and Simmons in the timeline in which Daisy destroyed the Earth. He’s a bit of a dork (which the script uses to poke fun at tech entrepreneurs), but given his ancestry he’s ferociously smart.

There’s a heck of a lot going on in this, and I haven’t even mentioned the weird stuff involving lost temples in Central America, or the gay black scientist that May recruits to bolster the team in the absence of Fitz and Simmons. A lot of it is very silly and doesn’t stand up to much examination, but this is a comic book series we are talking about. While the science in drowning in handwavium, the character arcs are complex and cleverly intertwined. I like this series because a lot of effort has been put into writing it.

Season seven will apparently be the last. I shall watch it. Maybe by the end Phil Coulson will be really, most sincerely dead. But I shall be rather disappointed if that is the case.