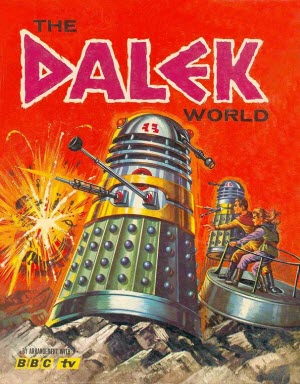 Many years ago, when the Doctor was an old man with a granddaughter rather than a handsome young buck, or a sassy woman, the Daleks were, well, Daleks. Us children loved them. We’d wander around the school playground with our arms stuck out stiffly yelling “EXTERMINATE! EXTERMINATE!!!” for all our little lungs were worth. This did not go unnoticed by people whose job it was to tell stories for money.

In those times there was a comic called TV Century 21 (TV21 for short). It was primarily a vehicle for comic adaptations of the Gerry & Sylvia Anderson “Supermarionation” series such as Fireball XL5, Stingray, Thunderbirds and Captain Scarlet. However, all science fiction TV was fair game, and thus they started a strip featuring everyone’s favourite psychopathic pepperpots.

The idea of Daleks as heroes is obviously a bit difficult to comprehend, but the strip worked well enough, and also featured in numerous Dalek Annuals such as the one pictured with this review. The Daleks could fight other, equally evil creatures. They could fight each other. But mostly they got to demonstrate their utterly implacable lust for destruction. Really, what small child could resist?

In order to write about the Daleks as characters you needed to have actual Dalek characters. They couldn’t all be uniformly, obediently, mindlessly murderous. Thus we were introduced to the Dalek Emperor with his (all Daleks are male, right?) impressive golden casing and large, orb-like head. As I recall he was shorter than the regular Daleks, and I have a sneaking suspicion he was supposed to recall Napoléon.

Anyway, the BBC has belated realised that stories about the Daleks and their wars with other non-human creatures are popular with the kiddies, and they have created DALEKS: The Animated Series. This is rooted pretty squarely in those ancient comics. It has the Emperor Dalek; it brings back the malicious Mechanoids, who were the greatest foes of the Daleks back in the day; and it is delightfully silly.

We are currently three episodes in, and thanks to their insatiable desire for destruction the Daleks have got themselves into all sorts of trouble. Presumably they will emerge victorious by the end of the series. In the meantime there will be plenty more ruthless extermination. Also it is free to watch on YouTube. If you have kids, they will probably love it.