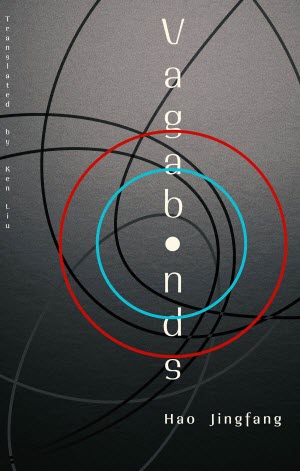 This is a remarkable book. I was hoping to have it in the last issue, but it took me a lot longer to read that I expected. There are two main reasons for that. But before I get to them, a quick introduction.

Hao Jingfang is one of the rising stars of Chinese science fiction. Her novelette, “Folding Beijing”, made her the fist Chinese woman to win a Hugo Award. Also she has a PhD in macroeconomics, so she has a good understanding of how modern societies are constructed. The book is masterfully translated by Ken Liu.

I found the book a very slow read. It reminded me a lot of Liu Cixin’s The Three Body Problem, which I didn’t finish. In part both books felt very Asimov-like, and maybe Chinese SF is still working its way out of the need to write in that sort of explanatory, giving-you-a-science-lesson style. However, I think there is more to it than that. What I found myself missing was a sense of foreshadowing.

By that I don’t mean the obvious stuff, where a character has a thought and the author adds, “but she would soon find out how wrong she was.” I mean that I didn’t have any sense of where the story was going, or what I should look forward to by way of a climax. I got a vague idea at the beginning, and that turned out to be right in the end, but in the meantime the book was all over the place. I am now wondering if this is a feature of Chinese fiction.

An analogy might help. Typically Western fiction is like a portrait. There are one or more central characters (or themes) and you know you should be focusing on them. Vagabonds felt more like a landscape with no obvious focal point. You are supposed to look at all of it, because there are lots of interesting things to see, but no one thing is central.

I may be totally off base here, of course. Ken, Regina, if you happen to read this, please tell me if I am talking nonsense.

The other reason that the book took me so long to read is that there is a whole lot to think about. Here is the basic set up.

We are in a new-future world and there is a colony on Mars. Some years ago the colony rebelled against Earth control and declared independence. There was a war, which the Martians won primarily because it was too expensive for Earth to fight so far from home. Now that the heroes of that war are old men, it is time for the two planets to try to come together again.

As part of the diplomatic effort, a group of young Martians, chosen from the brightest of their age group, are sent to Earth to study. In a nod to times past, they are called the Mercury Group. Now they are on their way home, and they are having to face re-integrating back into Martian society after several years on a very different planet.

The Earth of the novel is very much our world writ large. It is given over entirely to rapacious capitalism. Everything is driven by marketing. Everyone is an individual, free to do whatever they like, provided that they have the money to do so, and can make more money by doing it.

Mars is very different. The atmosphere is not breathable, so everyone lives in a single, large city, made mostly from glass because sand is one resource that Mars has in abundance. Many things are communally owned. Everyone has a place in society, and is trained to take up that place as soon as they have shown what social need they are best capable of fulfilling.

If you haven’t seen it yet, let me explain. Vagabonds is in direct conversation with The Dispossessed, widely touted as one of the best science fiction novels ever written. That is a staggeringly ambitious thing to do for a debut, but Hao makes a very creditable stab at it.

There is more to it as well. Le Guin was mostly writing about conversations between two opposing political philosophies within America. With Vagabonds it is hard not to see the book as being about the USA and China. It isn’t, of course, because China is not vulnerable and resource-constrained in the way that Mars is. However, Hao has the advantage of having lived in a planned economy, and has the academic skills to back up what she is doing. I can see lots of academic papers being written about this book.

The problem for our heroes is that they have now tasted the freedom of Earth. Mars, on their return, suddenly feels horribly repressive. Being students, their thoughts turn to revolution. This is complicated by the fact that our main viewpoint character, Luoying, is the granddaughter of Hans Sloan, the man who has been First Consul since the War of Independence, and is known on Earth as the Dictator of Mars.

She looked up at him, her eyes glistening. “The problem isn’t whether things are good here but that you can’t think it’s not good here.”

There’s just so much to think about in this book. I have a whole pile of quotes bookmarked and not enough space in a simple review to talk around them all. It isn’t always easy to understand the points that Hao is making either. I got the impression as I went through the book that I would not understand it properly without some grounding in Confucianism and Buddhism, which have very different modes of philosophical thought to what we are used to from Classical Athens.

There’s one final point that I want to make. Hao uses the Mercury group in her novel because they are people who have experienced both Terran and Martian society. Almost uniquely they are able to compare and contrast the two. But this puts them in a very difficult situation.

Luoying and her friends were fated never to return home. The ship they were on was forever vacillating on the Lagrangian point between the two worlds. To vacillate was also never to belong. It was their fate to be cosmic vagabonds.

That’s a metaphorical ship, of course. What Hao means is that having seen both societies, Luoying and her friends no longer feel at home in either. The only “home” they have is each other, people who share the same life experience.

This brings me to a new series of online talks being put on by the folks who produced FutureCon. They will, I think, be monthly, and the first one focused on pan-American SF beyond the USA. One of the panellists was Alejandra Decurgez from Argentina. She’s a psychologist in her day job, and she said a lot of interesting things. At one point she started talking about how our sense of community is very different in these days of global pandemic. Our group of friends is no longer the people we see daily in our local geographic spaces, or at work, but the group of individuals that we interact with regularly online. Typically we choose these friends because they share similar values to us, and those values may be very different from those of the nation states in which we live. In a very real way, we are all becoming Hao’s vagabonds.