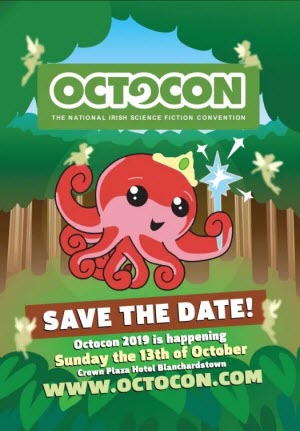 For those not familiar with European conventions, Octocon is an annual event held in Dublin. This year it is celebrating its 30th anniversary, which is an impressive achievement. It is a great shame that it was no able to do so in person.

I first went to Octocon in 1999, and things were a little chaotic. Two decades later the convention is very smooth. Communication was good. The branding was good. Technically they had it all together. Programme items were streamed through Twitch for very much the same reasons as we ran CoNZealand Fringe through StreamYard. It gives you much better control over the live event than using raw Zoom. Twitch itself is a bit of a nightmare, being a centre for the streaming of all sorts of things, but thankfully you don’t need to pay much attention to it.

Of particular significance to me was the fact that the convention’s Fan Guests of Honour were a trans woman and her wife. Congratulations, Philippa and Helen, you very much deserve it.

I had just the one panel, titled “Better with Age – Older Characters in SFF”. I guess I’m being stereotyped again. But it was great fun, and I was honoured to be on panel with Ian McDonald, Gillian Polack and Marguerite Smith. I also had to be on hand for Juliet McKenna’s reading.

There were parties too and, because the convention was free to attend, anyone could drop in. I nudged Kevin and he was able to join us for the Glasgow in 2024 party and the Dead Dog.

There was a Discord, and as the convention was fairly lightly attended it worked very well.

Thanks to being on top of the tech, Octocon has been able to put all of the content up for viewing already. You can find links to all of the panels here.

Good job, Irish pals. But hopefully I will be able to come to Dublin again soon. I miss your lovely city.