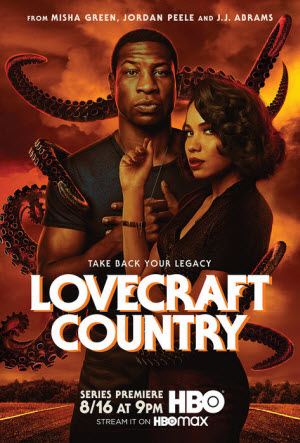 Well, that was interesting. Normally I don’t watch horror on TV. Lovecraft Country was very clearly filmed as horror, but mostly seemed more silly than scary. That, of course, is in no small part due to the fact that trying to represent the unspeakably horrible on screen is always doomed to failure. When we throw in the fact that this is Lovecraft we are talking about, and what he was terrified of was particularly weird, well you have no chance.

There was a lot of movie blood spurting everywhere. Hopefully it was easier to clean up than real blood.

There was also a lot of sex. Possibly this is prudish of me, but I tend to think that watching other people have sex is incredibly boring compared to actually doing it yourself. However, I was able to console myself that Lovecraft himself would be absolutely mortified to think that a TV series based on his life’s work was filled with so much groaning and humping.

It is a long time since I read Matt Ruff’s book. I definitely recognised parts of the story, but I’m in no position to know how closely Misha Green stuck to the original. More to the point, I don’t think it matters. I’m sure that one of Ruff’s objectives in handing the book over to a bunch of Black creatives to play with, would have been to allow actual Black people to put their stamp on things.

I hope, in turn, that the series worked well for Black viewers. There was a panel on the series at FIYAHcon, and it was clear that there were a number of reservations, especially from some of the audience. There’s always an issue, when a marginalised group gets a chance in the spotlight, that you have to be perfect or it will reflect badly on the entire group. That’s true for Black people, and it is true for Queer people. Lovecraft Country featured a number of Queer Black people, and that’s more than double jeopardy.

The problem is that many of the characters in Lovecraft Country are not very nice people. And I don’t just mean the whites. Personally I’m pleased that Misha Green and her team elected to roll with it. Being able to have bad people who are Black and Queer is an important part of liberation, because if people are not allowed to be bad then they are not free.

There is an honourable exception to the cast. I’m very fond of Hippolyta. The episode that she stars in will be on my Hugo ballot next year.

The final question to ask about any TV series is whether the ending worked. Given that this is cosmic horror, the finale was always going to be a lot silly. Nevertheless, I thought the show did very well. I particularly loved the final scene. In some ways, that final episode might be the scariest thing about the show. Of course it is only potentially scary for white people, but if we are scared by it, we very much deserve it.