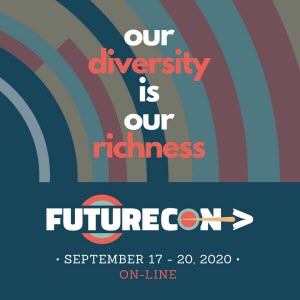 There have been lots of online conventions since the pandemic happened, but in my opinion the most interesting of them has been FutureCon.

To start with, this is a convention organised largely outside of the traditional con circuit. Francesco Verso was involved, and he’s part of the team putting on Eurocon in Italy next year. However, the majority of the team is from Brazil. You may be familiar with Fábio Fernandes, and if you follow my work closely you might have heard of Cristina Jurado from Spain, but this may well be your introduction to Ana Rüsche, Renan Bernardo & Jana Bianchi. They all did a fine job.

One of the objectives of the convention was to make it truly international. I think they had speakers from 26 different countries in all. Many of them were people who might not be able to attend a US or European convention in person. I was particularly delighted to see Mexico’s Pepe Rojo was involved. I adored his story in Cosmos Latinos.

In order to emphasise the international nature of the event (and de-fang the awful reality of having to hold the convention in English so we could all understand each other), panellists were invited to submit bios in their local language. I wrote mine in Welsh. I hope I did an OK job of it.

By the way, there is such a thing as Welsh language science fiction. I talked a bit about it on the translation panel. Hopefully there will be more news of that next year.

Because this was a brand new convention, there were no expectations from the audience. Sensibly the ConCom restrained their ambitions and had only 16 program items spread of 4 days. That allowed them to run the event with a very small crew. And they were 90-minute slots so that was 6 hours of programming per day, which should keep most people happy.

Many of the program items were 101 type stuff, introducing you to science fiction in various parts of the world: Africa, South America, Eastern Europe, China and so on. But there were also some meaty discussions. My attendance got derailed by a work emergency, but I have watched and enjoyed the panels on AI, solarpunk and decolonising the future. I also watched the Eastern Europe panel because Aleksandar was on it. All of the panels are still available online for free. You can find them here.

The con was an interesting experience for me. I try hard to be a good ally by promoting, and publishing, translated fiction, but I can totally understand the desire of many of the participants to sidestep the entire problem of the US publishing industry by reading in their local languages, and by translating between them. It is a big old world out there, and by the time you have got the Chinese, Indians, Brazilians and Russians together, there are a lot more of them than Americans and Brits. They don’t need us.

I very much hope that FutureCon becomes an annual tradition. I love how they feel free to experiment with the form of conventions, and of course the truly international nature of the event. FutureCon represents what Worldcon could be, if it wasn’t weighed down by decades of tradition and Anglo-centric assumptions.