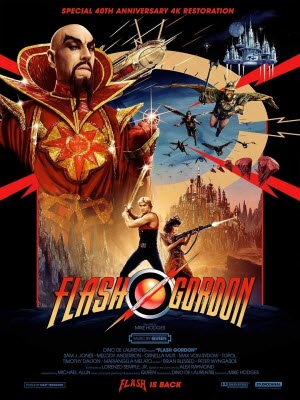 With the dominance of Marvel, and to a lesser extent DC, in modern cinema, it is easy to forget that these are by no means the only comic book characters to have made it to the big screen. Johnny Weissmuller is by far the most famous actor to portray Tarzan, but he was only the 6th man to do so. However, in terms of entertainment for kids, Universal’s serialised adventures of Flash Gordon, starring Buster Crabbe, were by far the biggest superhero stories of their day. And because this was before we had a TV in every home, kids would go to the cinema to watch them.

After WWII, Flash Gordon disappeared from our screens, but he was not forgotten. A young man called George Lucas was keen to make a Flash Gordon movie, but he couldn’t afford the rights so he made his own space adventure instead. It did quite well.

Meanwhile, hot-shot producer, Dino De Laurentiis, decided that he would make a Flash Gordon film. De Laurentiis has made a large number of very successful movies, some of them widely acclaimed. But he also made Barbarella, which might have given people a clue as to what his Flash Gordon would be like.

It might not have happened that way. De Laurentiis had originally hired Nick Roeg, fresh from his triumph with The Man Who Fell to Earth, to helm the film. Quite a bit of work was done on Roeg’s version of the film. But the producer and director had a falling out, and responsibility for direction was passed to Mike Hodges, previously famous of making thrillers with Michael Caine.

Forty years on, it is hard to imagine how anything quite so bonkers as Flash Gordon might have been made. In these days of CGI, it is possible to create space opera that doesn’t rely on camp to cover up the paucity of the special effects. Of course the Wachowski sisters tried to have their cake and eat it. When I first saw Jupiter Ascending I was struck by how Caine’s final scenes when he has his wings back reminded me of Pygar the Angel from Barbarella. But the wedding scene in Jupiter Ascending was probably intended to hark back to the climax of Flash Gordon. The Wachowskis know their movie history well.

I picked up the 40th Anniversary edition of Flash Gordon because I wanted to watch the extras. Much of what I said above was informed by them. They also include a couple of episodes of a Flash cartoon series. (Flash and Dale have a pet baby dragon called Gremlin, who knew?) But I think they will be most of interest if you happen to be a Brian Blessed fan. He even gets to do a commentary track for the film. Naturally he is rather more interested in the character of Prince Vultan than in Flash.

One of the things I was surprised to discover was quite how much of the film was improvised by the cast. That American Football based fight scene in Ming’s palace, for example. Blessed also claims credit for improvising various iconic moments, and advising other actors on theirs. Of course that might just be Vultan talking.

Having re-watched the film a couple of times, I have to admit that my favourite characters are Klytus and Kala. Ming just a sad old man who happens to be Ruler of the Galaxy. Klytus and Kala have to work hard at being evil. Though it is great to see Timothy Dalton channelling Errol Flynn.

Oh, and there’s the music. The film would probably have become a cult classic anyway, but that iconic Queen soundtrack sealed the deal.