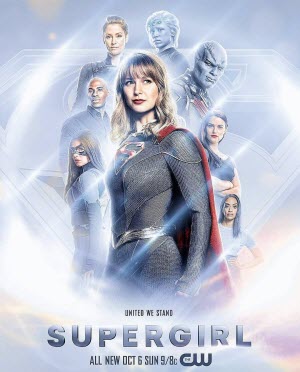 This was not one of Supergirl’s best years. Following the intensely political season 4 was always going to be hard, and the season had other major problems to cope with, so I’m actually very relieved that it has been renewed for a 6th season.

One of the problems I had with the season is the way in which it upended a lot of fixtures at the end of season 4. This seems to be becoming a habit on the show. It would be nice to have a bit more continuity. Also I thought that Leviathan was a fairly weak major villain. They are a super villain group so supposedly powerful that you can’t quite work out why they don’t win easily.

I wasn’t convinced about the addition of Andrea Rojas to the show. We already have one very rich, morally compromised, genius businesswoman in the shape of Lena Luthor. We don’t need another one. I also thought that William Dey was a rather limp excuse of a love interest. Kara certainly doesn’t have the same chemistry with him as she does with Mon-El, though there are good reasons for that which I will get to.

On the upside, Dreamer is still a regular feature on the show. What’s more, half of one episode (“Reality Bytes”) was devoted to her hunting down a villain who is beating up trans women. Social media hatemongering was a feature of the episode. I was pleased to note that, in this universe at least, the L is still very much with the T. That episode will be on my Hugo ballot next year (though I don’t expect it has any chance of being a finalist).

Jon Cryer’s Lex Luthor is so delightfully self-centred and devious that the character actually makes sense to me for once. I’d never really understood Lex before. Now I do.

One of the biggest issues that the series had to deal with is having Crisis right in the middle of it. It must be really hard to craft a story arc when the whole multiverse is remade half way through. And where Lex’s public persona has changed from master criminal to a beloved philanthropist and hero overnight.

One episode is devoted entirely to explaining just how cunningly Lex has been manipulating things behind the scenes since Crisis finished. Because Kara has very little presence in that, Melissa Benoist took the opportunity to make her directorial debut. I thought she did pretty well.

The final villain that the show was unable to overcome was the pandemic. The season ends on a massive cliff-hanger, but only because filming got cut short by Lockdown. Some of the team were stuck at home in LA, others were stranded in Vancouver. It can’t have been much fun waiting to see if the show was going to be renewed, and the final episode(s) shot.

As it is, one of the crew has made the best of the hiatus. The start of season 6 will be delayed a little because Benoist is on maternity leave. I understand that the father is Chris Wood who plays Mon-El, which explains the whole romantic chemistry thing.

I gather that season 6 will begin some time in the middle of 2021, though when we will get it in the UK is another matter. I shall wait patiently.