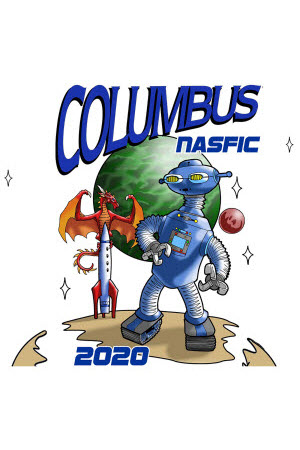 Lockdown happened in sufficient time for this year’s NASFiC to be cancelled. However, perhaps as a result of the success of CoNZealand’s virtual programming, the committee decided at the last minute to try something virtual. It was all a bit of a rush, but it worked fairly well.

To me one of the most interesting things about the NASFiC was the different atmosphere. In theory a NASFiC is an official WSFS event. However, despite being thrown together in a hurry on a shoestring, it didn’t attract any of the opprobrium directed at CoNZealand. Of course it helped that it was free to attend, so no one felt that they’d been sold something substandard. But there was no suggestion that They should have done better.

I was on three programme items at NASFiC. One on how experience of more than one culture affects your writing; one on running SF&F organisations; and one on the effect of the pandemic on publishing. I moderated the first and third. They all went very well, so thanks to my fellow panellists for that.

The recordings of all the panels will eventually be available on the convention’s YouTube channel. However, editing video takes time and only a few are currently available. In the meantime the raw streams are available here.

There were several significant innovations that NASFiC made compared to Worldcon. Firstly each programme room had two separate hosting streams. Panellists were invited to get online half an hour before the panel was due to start. This gave plenty of time to sort out any technical issues, and gave the same experience of having the pre-panel discussion in the Green Room. I thought it worked very well.

Somewhat less effective was a system called Titan which allows embedding of a Discord channel in a website. In theory this allowed the audience to watch the panel and the associated Discord chat, and to comment directly in Discord. Each panel had a moderator on hand whose job it was to spot interesting comments from Discord and paste them into the Zoom chat, which was invisible to the audience. That replicated some of the good features of StreamYard (which has both public and private chat windows). Sadly the embedding system wasn’t very robust, but I’m sure it will get better.

Another innovation that NASFiC made was on show in the Friday night party. I missed it because it started at midnight my time. Kevin was present says he liked it, but that other people did not. It used a system called Gather Town which is a simulated mixing space. It looks like an old-fashioned video game, but you can customise the gather space, and you can only interact with people that you are physically close to in that space. This makes it feel much more like a real party.

The downside for NASFiC is that Gather Town is expensive for large numbers. You can have a free event with up to 50 people, but beyond that it gets expensive quickly. Consequently they only used it once early on. However, it occurs to me that for future conventions individual party hosts could arrange for their own Gather Town spaces and make those available to the con. A limit of 50 on an individual party doesn’t seem too bad (and some publishers may be willing to pay for more).

Finally kudos again is due to Kristin Seibert who, for NASFiC, organised a scavenger hunt on Discord. A number of kitten icons were spread about the various channels. If you spotted on and clicked on it that would open up the channel for that kitten, and each on had a task for you to complete. I didn’t have the time to complete the game, but quite a few people seemed to have done so, and lots of people enjoyed playing it. It does require a bunch of Discord channels to run, but it looks like a thing that other conventions could do, provided that they can find someone as creative and enthusiastic as Kristin to run it.