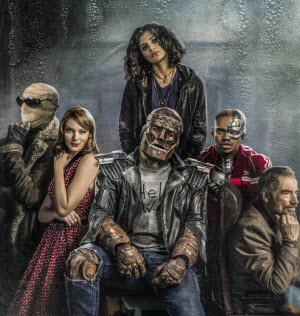 Some American superhero shows appear very quickly on British TV. Others suffer significant delays, or don’t get there at all. One of the prime factors affecting the appearance of a show is queer content. Batwoman, for example, took ages to get on British TV. Sky wouldn’t take it at all, and it finally ended up on E4 on a Sunday night, just before Naked Attraction, which appears to be a nude dating show. That’s because Kate Kane is a lesbian. The most actual sex I’ve seen in episodes I have watched before has been a bit of kissing in bed. Doom Patrol never made it to TV at all, for reasons which will become obvious, but it is now available on Amazon Prime and you should all watch it.

While the Doom Patrol first appeared in comics in the 1960s, the TV series appears to be based on Grant Morrison’s run on the post-Crisis revival of the comic. I haven’t read all of that, so I’m not well placed to say how different the characters and storylines are, but the inspiration is clearly there, including the characters of Crazy Jane and Danny the Street, whom Morrison invented.

Anyone coming to the TV series cold will probably assume that it is a piss-take of the X-Men. The team is lead by a wheel-chair-using older man, Doctor Niles Caulder, aka The Chief. All of the characters have powers that somehow prevent them from living among ordinary people. There is even a Brotherhood of Evil for them to fight. But a lot of this connects back to the original 1963 incarnation of the team, and there is some suspicion that Stan Lee got the idea for the X-Men from the Doom Patrol.

Unlike in the X-Men, the powers of the Doom Patrol are not immediately useful. Robotman (Cliff Steele) is simply a brain in an iron body. He’s strong, but even the original incarnation of Tony Stark’s Iron Man would take him apart in minutes. Elasti-Girl, Rita Farr, has a body that naturally dissolves into an amorphous blob of flesh. It takes all of her concentration just to force it into shape so that she can look like a human. Negative Man (Larry Trainor) has no powers at all. His body is swathed in bandages because of extreme all-over burns. But inside him lives a mysterious alien energy being that might be useful in a scrap if it wasn’t so angry with Larry. And then there is Crazy Jane, who has 64 different personalities. Some of them have superpowers, but who knows which one will have control of her body at any one time?

It should be noted also that none of the Doom Patrol members are exactly hero material. Cliff is an ex-racing driver and misogynist arsehole. Rita is a former Hollywood starlet and exactly as arrogant and manipulative as you might expect. Larry is a closeted gay man who led his wife and boyfriend a merry dance before the accident that made him Negative Man. And Jane, well, there are 64 of her, and some of them are really unpleasant. Even the seemingly cuddly Niles might be hiding a secret or two.

Into this mix, to give the team some actual fire-power, and some more ethnic diversity, the scriptwriters have added Cyborg (Vic Stone). He’s an actual member of the Titans in the comics, but he fits perfectly into the Doom Patrol being a somewhat upgraded version of Robotman and someone whose backstory involves accidentally killing his mother.

Of course it is exactly this mix of totally unsuitable characters that makes Doom Patrol such a good series. It is very much character-driven, and much of the arc of the first series involves the members of the team coming to terms with their lives. They are matched against an all-powerful villain called Mr Nobody who cunningly uses their own insecurities against them. Early on, Mr Nobody kidnaps The Chief, and the effectively leaderless team has a whole lot more issues to overcome before they can get their leader back.

Doom Patrol never remotely takes itself seriously. One of the adversaries the team takes on is The Beard Hunter, a man who gains knowledge and power by consuming the facial hair of his opponents. Cyborg is helpless against him once he’s found some of Vic’s hair, but of course he has no power over Rita. Many of the episodes have voice-over narration from Mr Nobody, who leaves us in no doubt how much he hates Niles, and how much contempt he has for our heroes. He has no qualms about talking to camera, and by the end the fourth wall is not so much broken, as lying in pieces at his feet.

The show certainly isn’t for kids. All of the characters, especially Jane, have harrowing backstories. There isn’t a lot of obvious sex and violence – nothing compared to Sense8, for example – but it does give a little pause for thought. At one point they use Lou Reed’s “Perfect Day” for the soundtrack, which shows you just how depressed everyone has become. Larry’s background story obviously involves quite a bit of men kissing. But the thing that probably terrified the British TV executives is not explicit at all.

Danny the Street is a sentient high street from a small American town. They can teleport, so they can appear almost anywhere in the world. Sometimes we find them out in a field, sometimes in the middle of a real town. Because of this, Danny has become home to an extensive queer community seeking refuge from a world that hates them. One of the main businesses on Danny is Peeping Tom’s Perpetual Cabaret, hosted by the drag queen, Maura Lee Karupt. Danny themself is non-binary, and even contains a flagpole with the non-binary flag flying from it.

This is one area where the TV show has obviously updated the Morrison comic, because they have the terminology spot-on. I should note, however, that if the show runs long enough they will probably get to Rachel Pollack’s run on the comic and have to introduce Coagula, a trans woman superhero.

The other great enemy in the show is the Bureau of Normalcy, a secret government department dedicated to returning the world to the presumed holy status of straight, cis, white 1950s America. As you can imagine, agents of the Bureau have a particular loathing for Danny.

The other thing that the TV series has going for it is the cast. Timothy Dalton plays Niles Caulder with all of the Shakespearean gravitas you might expect. Brendan Fraser manages just the right mix of buffoonery and pathos as Cliff. And Diane Guerrero is simply brilliant as Jane, often having to completely change personality mid-scene. (There may be some TV trickery involved here, but in any case she has to play several distinct versions of Jane, not just one character.)

I am really annoyed that it took so long to get this show in the UK. I would have had it on my Hugo ballot both in BDP: Long Form for the series, and in BDP: Short Form for “Danny Patrol”, the episode that introduces both Danny and the Jane alter-ego who is a manipulative blonde called Karen. Thankfully Amazon have decided to make season two available on time, and if it is anywhere near as good as season one I will have it on my ballot next year.