She-Ra and the Princesses of Power – Seasons 4 & 5 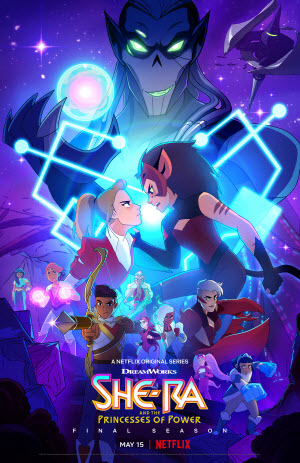 It took me a little while to get to the end of this series. I had hugely enjoyed the first three seasons, but got stuck in the middle of season 4. More about that later, but when I saw how happy everyone was with the fifth and final season I knew I had to watch it all through. I was not disappointed.

Those of you who were young when the original He-Man and She-Ra series aired (I was much too old) will remember that She-Ra defends the planet of Etheria from the evil Hordak and his, well, evil Horde. There is a theoretical connection in that Princess Adora, her non-magical identity, is the sister of Prince Adam, aka He-Man. However, the two series take place on different planets. Hordak was originally an ally of Skeletor who was betrayed by his boss and banished to Etheria.

The new series completely reboots this. We are still on Etheria, we still have Hordak and his Horde, but everything else is much more complicated and the supporting cast has changed out of all recognition.

For the first few seasons She-Ra is fighting against Hordak and the Horde as we expect. Characters from the original series such as Bow, Glimmer and Catra still exist, but are very different. In particular all of the main characters are quite clearly teenagers, whereas in the original series they were adults. One of the things I like about the series is the way that the characters are shown to be growing older as it progresses. That’s particularly clear with Glimmer between season 3 and season 4 after she becomes Queen of Etheria. The dude-bros who complained that the new She-Ra didn’t look sexy enough in the new series might be happier with what she grows into by the end.

All of the major princess characters in the new series are based on characters from the original series, but are significantly changed. In particular, while the original series was very much a battle of good against evil, the new series is full of moral complexity. We see that, for example, with Scorpia who is loyal to The Horde until their cruelty drives her away, and Entrapta who is loyal to whoever gives her the most interesting science project to work on. Even the witch, Shadow Weaver, is happy to work with the Rebellion when it suits her.

While the original series was mostly fantasy, the new series is a marvellous mix of fantasy and science fiction. The First Ones are re-cast as an alien race who came to Etheria determined to harness its magical energy for their benefit. Hordak is revealed to be merely a lost clone of Horde Prime who was abandoned on Etheria when it was moved into the shadow dimension of Despondos. The rest of the universe has been conquered by Horde Prime and his clone army. He is keen to find his way back to Etheria so that he can finish the job.

However, the main difference between the original series and the new one is that the new series has masses of queer content. Bow has gay dads (who are adorable librarians). Two of the minor princesses, Spinerella and Netossa, are a lesbian couple, and the whole series hinges on the relationship dynamic between Adora and Catra.

In the original series, Catra is simply the baddest of the bad girls working for The Horde. She is She-Ra’s principal antagonist. But the storyline also has Adora growing up as a member of the Horde until she escapes, joins the Rebellion, and becomes She-Ra. The new series shows us Adora and Catra growing up together as best friends. Adora is always the star student, Catra is always running foul of Shadow Weaver and getting punished. Fortunately for Catra, Adora is always there to pick up the pieces.

Adora rarely questions her own privilege, especially after she becomes the mightiest warrior on the planet. Catra is left with a burning desire to prove herself, and if the only way to show that she’s as good as Adora is to become Hordak’s chief lieutenant then so be it. Adora, of course, desperately wants to rescue her friend and redeem her. The last thing that Catra wants is for Adora to save her yet again.

Despite the constant warfare and rivalry, the affection between Adora and Catra is always evident throughout the series. That it should end with a kiss and them expressing undying love for each other was always inevitable. It was only a matter of how it would come to pass.

Actually I’d had a sneaking hope that the series might have ended with Kyle saving the universe by accident, but I don’t have space to explain what means so I’ll just have to leave it here for other She-Ra fans.

I should note that Adora and Catra are by no means the only happy couple by the end of the story. There are several others, some of which have been carefully set up by the scriptwriters. One in particular is integral to the plot. I’m not going to spoil that.

The queer content was also the one element that gave me pause during season 4. This introduced a character called Double Trouble who is a shape-shifter and a spy for the Horde. DT, as they are known, infiltrates the Rebellion and reports their plans back to Catra.

Gender on Etheria is a complicated thing. Queer relationships are common, and many of the characters are clearly not human. Catra, for example, has cat ears and a tail. Nevertheless, there do appear to be males and females, by which I mainly mean that there are characters with boobs and characters without boobs. Fans of the series have come up with all sorts of headcanon by which characters are secretly trans, but the only canonically trans character in the series is DT.

Given the moral complexity of the series, the fact that DT works for the Horde doesn’t make them Evil. They do it for the love of the job as much as anything else. By the end we get a brief glimpse of DT fighting against Horde Prime alongside everyone else. I should also note that DT is voiced by a non-binary person, which is excellent representation.

The problem I have with the character is that, in their natural form, DT is presented as a person-without-boobs, but in order to infiltrate the Rebellion they disguise themselves as a person-with-boobs, albeit quite a young one. This plays directly into the common trope of trans women being “deceivers” and dishonest.

Thankfully this did not end up being a major feature of the plot. DT is unmasked fairly quickly and there is nothing said about the method of the deception. But given how aware the scriptwriting team have been of queer issues, I’m sure they must have been aware of the problem and I’m wondering why they wrote DT as they did. Possibly the fact that DT gets to come back in one episode of season 5 playing a character who is basically Prince was an attempt to redress the balance.

One episode in season 5 is set on an alien planet that our heroes have to visit to get more fuel crystals for their spaceship. (Yes, obvious Star Trek reference. There’s a thing about having to fly through an asteroid field too.) There they meet up with the three Star Siblings who are fighting against Horde Prime. We only see them this once, but they were clearly introduced for a reason and I suspect that they will be central to the rumoured She-Ra film that is being hinted at on social media. I am so glad that we haven’t seen the last of these characters, or the creative team.

I could talk about this series for a very long time, but I don’t suppose that everyone is as obsessed with it as I am. What I will say is that the quality of the plotting is the best I have seen in any TV series in a very long time. I very much hope that season 5 makes it to the Hugo short list next year. Noelle Stevenson absolutely deserves a Hugo for this, and while I doubt that she’ll get one I at least want to see her name on that list.