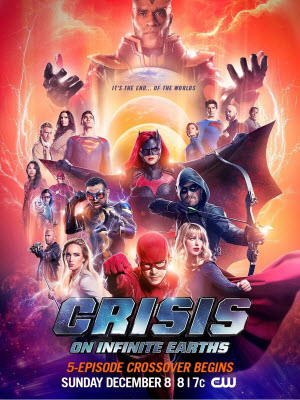 I have avoided crossover events in comics because they tend to require buying vast numbers of comic books that I mostly don’t have much interest in. That is, after all, the point. The comics companies hope you will like the books you don’t normally buy and stick with them. No way, comics buying is far too expensive a hobby these days.

The crossover events on DC’s television series are a different matter. I’m weirdly addicted to them because they are so bizarrely artificial.

While the Marvel Cinematic Universe is mostly a carefully constructed whole, curated under the watchful eye of Kevin Feige, the DC equivalent is something of a chaotic mess spread over multiple independent series on a wide variety of platforms. Does the Bruce Wayne who features in Titans on Netflix have any relationship to the one who is so notably absent from Batwoman? Who knows?

The concept of the multiverse is actually quite helpful to this. The idea that most of these different series take place in different universes, and that there might be different versions of the same characters in each universe, allowed DC to give their creative teams much more artistic freedom. There was no overall canon to adhere to.

And yet, Crisis exists. It happened in the comics. It had to happen on TV as well. Besides, the Arrowverse – the suite of TV shows airing mostly on the CW channel under the creative control of Greg Berlanti – was ripe for just that sort of thing. The fact that Supergirl was set on a different Earth to Arrow and The Flash, and that Batwoman was on a different one again, seemed weird. Goodness only knows which Earth Legends of Tomorrow is set on. Crisis would bring them all together, and give us more opportunities for that great chemistry between Melissa Benoist (Supergirl) and Grant Gustin (The Flash).

For UK viewers this latest crossover was complicated by the addition of Batwoman to the mix. It is airing on E4 rather than Sky, and the programme managers there decided to skip the Crisis episode because E4 viewers might have no idea what it was all about, or indeed who all of the other characters were. I ended up buying the DVD of the crossover series because that was the only way I could watch the whole thing.

The series itself is the usual superhero fluff ramped up to cosmic proportions. In Avengers: Infinity War Marvel famously killed off half of all life in the universe. Those of you who save seen Endgame know how that turned out. In Crisis DC kill off everyone in all of an infinite number of universes, except for a small handful of heroes, and everyone in every universe except ours stays dead. It is, without doubt, the greatest mass slaughter in the history of comics. Of course there is a version of many people in our universe, but many other universes will have deviated far from ours and be full of completely different people. All of whom now never existed in the first place. Ouch.

Talking of dead, and major spoiler warning here, it appears that Oliver Queen (the Green Arrow in our universe) is really, most sincerely dead. At least for a few months. He doesn’t dramatically reappear in the few episodes of Arrow that follow Crisis, and no future seasons are planned. I’m sure that he’ll be back eventually, but there has been a rare and welcome sense of permanence to his passing.

Other series are less affected. Following episodes of The Flash certainly reference what happened. Supergirl is perhaps more affected that most because of how Lex Luthor manages to manipulate the events of Crisis in his favour. I have to say that Jon Cryer’s Lex is fast becoming my favourite screen villain ever. He is actually as smart as Lex is supposed to be. And incredibly slimy with it. Also the Supergirl screenwriters have found a way to make him morally ambiguous for a while. There are actually things in the universe that are more of a threat to us than Lex. That makes them a threat to him as well, and he won’t tolerate that.

Batwoman carried on as if nothing had happened. Which is just as well given the scheduling decision from E4. (No, I have not forgotten that the Australian TV channel that took Babylon 5 decided to mess with the order of the episodes so that the one featuring the election of President Clark came after the one in which he was assassinated. TV executives can be that stupid.)

Goodness only knows what will happen with Legends of Tomorrow. That series is so insane that nothing would surprise me. During crossovers the Legends cast regularly break the fourth wall to talk about how they dislike being roped into crossover events; or have missed out on things because they refused to get involved in the last crossover. Its delightful.

Possibly the most interesting aspect of the series is that there were aspects referencing DC shows outside of the Arrowverse. That indicates that not only is the Arrowverse now all in the same universe, but that Titans and Doom Patrol are too. Black Lightning even had a starring role in Crisis. This is quite interesting, because Connor and clone-Krypto exist in the Titans universe, which has direct implications for Clark, Kara and Lex in Supergirl. Also everyone in Batwoman says they have no idea where Bruce is, but he appeared in the last series of Titans. Or possibly not, but that’s all speculation for season 3.

Anyway, no one told me that Doom Patrol season one was available on Amazon, so as soon as I have finished this zine I will be watching. Season two has apparently already dropped. I am so looking forward to this, even if we don’t get Coagula.