Thanks to the idiocies of mainstream publishing we haven’t seen much from Liz Williams of late. Fortunately, the excellent Ian Whates and NewCon Press have coaxed her back into the saddle again, and the most recent result is Comet Weather. This looks like being the start of a new and interesting contemporary fantasy series.

Williams, as many of you will know, is not just a very fine writer. She’s also a practicing occultist and, with her partner, Trevor, owns a witchcraft shop in Glastonbury (which has recently closed physically, but will continue online). The new series taps into some of that expertise. It has ghosts and ley lines and star spirits and hexes and the like. It is also very female-centered.

The main protagonists are the four Fallow sisters: Bea, Stella, Serena and Luna. Their mother, Alys, was a bit wild in her hippy days and had each girl with a different man. Alys has recently gone missing, and is presumed dead, but the sisters know different. They are pretty sure they’d know if she had died, and even if they didn’t their grandfather, who will still sometimes talk to them when they visit his grave, definitely would.

Beatrice, the eldest, is a practical one staying at home and looking after the family farm. She might seem a little boring, but she’s actually having an affair with the ghost of an Elizabethan man who once sailed with Drake.

Stella takes after her mother, wandering around Europe making money as a DJ and having a string of affairs with anyone who takes her fancy, though to date they have all been living.

Serena is the successful one, living in London thanks to a career as a fashion designer. She’s having an affair with the lead signer of a well-known rock band, who is not the father of her teenage daughter.

Finally there is Luna, the youngest, who was thinking of becoming an environmental activist but has recently taken up with a boy from a family of Travellers, at least in part because she thinks that Alys might be off on the sort of path only people with deep knowledge of the land might know.

Everything is coming to a head because a comet is due to arrive in the solar system soon. Grandfather Fallow was a keen astronomer, which is perhaps how come so many star spirits hang around the house. A comet, of course, is a harbinger of great changes, and a time of danger. What this will mean for the sisters, and their missing mother, is the great question of the novel.

Naturally the book is set in Darkest Somerset. It is, after all, a part of the world that Liz knows well. Indeed, despite being a fairly recent arrival, she knows more about the country folk than I do, because she lives among them and I grew up in a town. Of course she knows the town folk too.

“There’s a lot of inbreeding in Somerset. They put ‘NFB’ on patient charts in Taunton hospital”
“NFB?”
“Normal For Bridgwater.”
“Aw, that’s unkind,” Nell said, but she was smiling.
“True though. Webbed feet and all sorts.”

Yep, entirely true. Nell, by the way, is Cousin Nell the Famous Author from America, who is a bit of a dark horse in this book, but whom I suspect we will hear more of in future.

I should note that the local knowledge isn’t quite perfect. I don’t think Williams takes the train as often as I do, because there were two minor route errors in the book, but very few people are going to notice that.

With years of experience behind her, Williams writes easily readable prose that keeps you humming along through the book. Occasionally she waxes a bit poetic.

Now, she perched on a nearby gravestone and waited. The sky deepened and Venus sparked out between the branches of the yews, a lamp alongside the church tower. The moon was gibbous.

Equally occasionally she conjures other visions of the wild wood.

The accounts of Alys, first on Dartmoor and then in the church, had alarmed Bee. Usually cautious, she felt they should act, now the comet was here. So they were studying the map. Dark thought they should go via the watercourse, that there would be a way in.

If that wasn’t a Mythago Wood reference, then it taps into the same mythic substrate that infuses Holdstock’s famous work.

I really loved this book. It is written by a good friend and almost neighbour. It is also set in the part of the world where I grew up, and draws on many local traditions. But don’t take my word for it. Gary Wolfe enthused about it on a recent episode of The Coode Street Podcast, and Chicago is nothing like Darkest Somerset. Fantasy readers should snap this up as eagerly as they bought Juliet McKenna’s Green Man books. 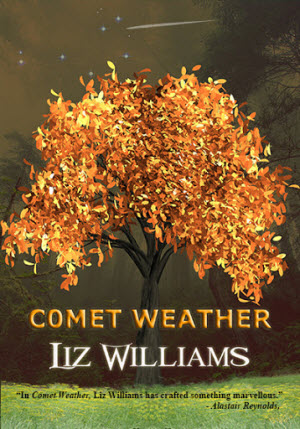