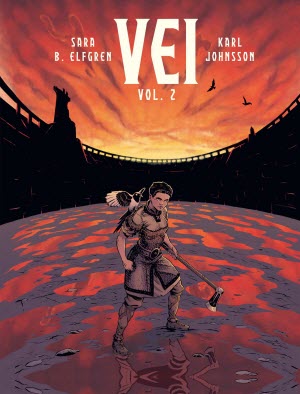 I was delighted to have been sent the second and final volume of Vei by Sara B Elfgren and Karl Johnsson. My review of Volume 1 explains the set-up, but basically it is a couple of Swedes being very creative with Nordic myth.

At the end of Volume 1, Vei has been appointed Champion of the Jotun in the Meistarileikr, a brutal gladiatorial contest between the Æsir and Jotun that takes place at intervals ridiculous to humans but entirely normal to god-like beings. Already she has killed many of Odin’s champions, but there are more fights to come before the contest is over.

As the story develops, both Æsir and Jotun show themselves to be arrogant, cruel and careless of human lives. But they are as gods, what can one do? Only one person seems to care about Vei’s plight, and would you trust Loki? With anything?

As I said last time, Loki is one of the best things in the book. They also get the best scene, in which they transform into a cat in order to get petted by Freya. But Loki also has a plan. Inevitably it involves significant amounts of chaos.

Occasionally Elfgren’s plot seems to play fast and loose with the common understanding of Nordic mythology. But hey, she and Johnsson are Swedish. It is their mythology. Besides, for all I know they may know of alternate versions of the myths that tell very different tales.

In this volume there is an ending. If you expected it to be a “they all lived happily ever after” one then you clearly don’t know much about Norse myths. It is, however, a satisfying one. And that, of course, is all that one can ask for.