Now that Neil Gaiman is Very Hot Property, DC are keen to make as much of the IP he created as possible. There is a Sandman TV series coming, which Gaiman will have some role in, but he doesn’t have much time for writing comics. Therefore we have the Sandman Universe series of comics. They feature the setting and characters that Gaiman created, and he has some level of script control, but the writers are people he has hand-picked to carry on his legacy. I was delighted that one of the people he picked was Nalo Hopkinson.

House of Whispers, then, is Hopkinson’s Sandman stories, and Volume 1 is now available as a graphic novel. It is set initially in The Dreaming, but Dream himself is not there. Lucien is doing his best to manage things in his master’s absence, but something is going badly wrong and he’s not going to get any help from the likes of Cain & Abel.

Enter Hopkinson, and in her train a whole heap of West African mythology, filtered through her native Caribbean lens. The lead character is Erzulie Fréda, the Haitian goddess of love and beauty. As befits someone of her dazzling charm, she has three husbands. She also loves to dance, and to encourage her worshippers to follow in her flirtatious footsteps. She doesn’t particular care about gender as long as people are enjoying themselves. Chief among her worshippers is Alter Boi, whose gender is decidedly mixed.

We also have Uncle Monday, a Florida legend of an alligator god. He was once an escaped slave, but he encountered the alligator worship of the indigenous Seminoles and was able to transform himself into a giant gator.

Villainy, such as there is, is provided by Shakpana, the god of smallpox and other things that might be viral. He’s a smart boy. Having made his name in infectious diseases, he’s keen to make use of the modern world and infect people with other things as well. Whether he’s the main villain here, or if he’s only a pawn of whatever is attacking The Dreaming, is as yet unclear.

Finally we have some actual humans. Latoya, her girlfriend Maggie, and younger sisters, Lumi and Habibi, live in New Orleans. They are among the first victims of Shakpana’s mischief-making, and become key to the story.

Little is resolved by the end of Volume 1. The story is very much a slow burn. For me the main attraction of the book is discovering the many interesting mythological characters that Hopkinson clearly knows well but are a total mystery to clueless white girl here. I’m particularly intrigued by Erzulie because it appears that there’s a whole family of goddesses with the same first name but different second names. Some of them appear in the book.

I’m reminded of how Suyi Davies Okungbowa made use of variations in the Orisha between different ethnic groups in Nigeria for David Mogo: Godhunter. I note also that in ancient Mesopotamia there were different versions of the gods and goddesses worshipped in different cities. The idea of a unified pantheon like that which we were fed for Greek and Roman religion when we were kids seems very much a modern construct now.

The art is not really to my taste, but it is very Sandman so it will doubtless be OK with fans of the series. I’m happy to go with it.

Aside from the mythology, I’m here for the unabashed queerness of the cast. I particularly loved the scene in which the girls finally encounter Erzulie’s worshippers and little Habibi addresses Alter Boi as, “Mister Lady, Sir”. Kids are great. They understand. 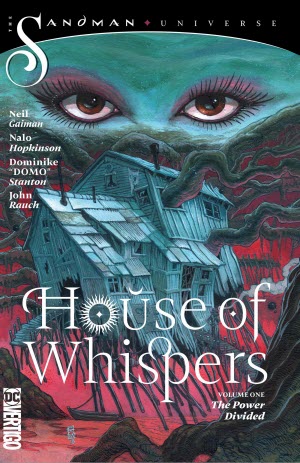