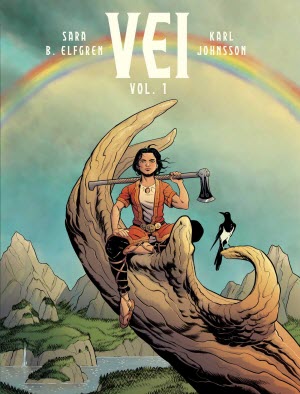 I don’t often review graphic novels here, because I’m not sure I’m competent to do so. This one, however, is written by my Swedish friend, Sara B. Elfgren, and is gorgeously illustrated by Karl Johnsson. It is newly available in English translation, and comes with an enthusiastic blub from Mike Carey who knows far more about graphic novels than I do.

The story of Vei is based on Norse myth, but it is very much a new thing, not simply a re-telling of well-known tales. I’m not exactly surprised that the Swedes want to get in on the act, seeing as how Americans have taken their stories in a very wild direction.

Our tale begins with a young Viking chief called Eidyr taking his longship crew to Jotunheim where he intends to win fame and fortune. Close to shore the crew spot a body in the water. It is a young woman called Vei who claims to be part of a tribe of human-like people who serve the Jotun.

Very mild spoiler: the Vikings mostly don’t last very long. Only Dal, Prince Eidyr’s slave bodyguard, has enough wit and martial ability to survive Jotunheim. He’s also the only one smart enough to trust the local rather than want to kill her for superstitious reasons. Vei, it turns out, is a better warrior than any of them.

There is a reason for that, and a reason why she is found in the sea. This is a story about the Jotun, and their endless war against the Æsir. Vei and Dal are but pawns in that war. Odin, as you might expect, is a cunning, duplicitous bastard. The Jotun seem better people, but they are giants, and they are very much not human. (I’d say someone has been listening to my lecture from Graz, except that this must have been drawn long before last December.)

The portrayal of the Æsir is particularly interesting, especially given that the creators are Swedish. Thor looks more like Obelix than Chris Hemsworth, and Freyja isn’t the lithe beauty we have come to expect (though she does have her cat chariot). Then there is Loki, and Loki is everything we have come to expect: cunning, alluring, and very gender-fluid.